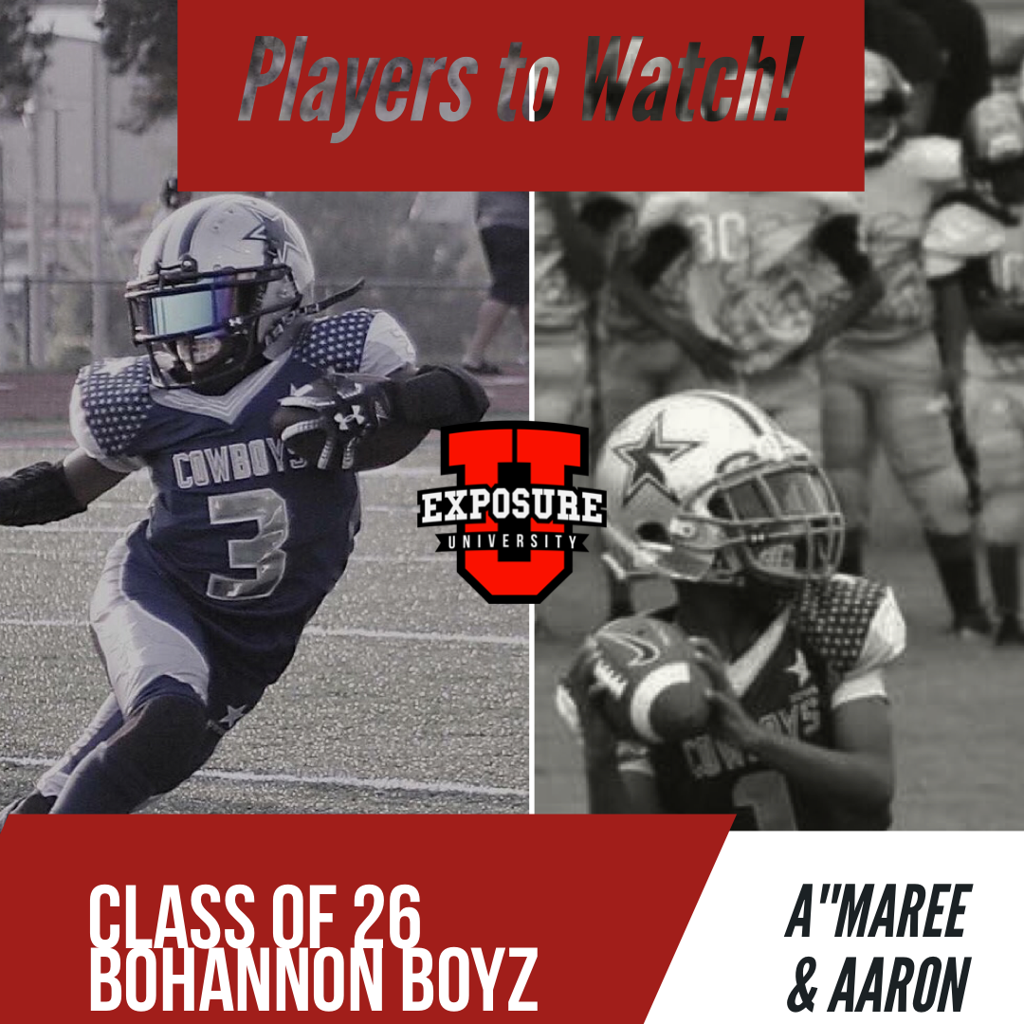 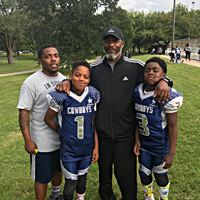 They are class of 2026. They are currently 6th graders. A'maree plays QB and FS. He is a natural athlete that's capable of playing multiple positions but has really blossomed as a top QB in the last 2 years. Duece (Aaron) is arguably one of top running backs in the nation in 11u. He has made a name for himself with his amazing vision and blazing speed. They play for the 11u Wichita Cowboys which is the #1 team in Kansas and #11 in the nation. They have been playing football since they were in 1st grade but it started long before then for them. As 3 year olds I would have them racing each other back and forth in the front yard. Those races have now turned into them racing up and down the field scoring touchdowns. They are both A and B students. Neither has ever received a C in school. They both were selected to play in the Diamond All American game 2 years in a row. 2 years ago they took the field in Virginia Beach. A'maree won defensive MVP and Duece won the Offensive MVP. Last year they were in Myrtle Beach for the same game. This year they were selected to play in the Coast to Coast All American game in Kansas City. Duece was awarded the games offensive MVP award and A'maree was the starting QB on that team competing against QBs from all over the Midwest for that spot. He won the QB skills competition that week. They both look forward to playing college football at the D1 level and hope they can be roommates. They want to go to Alabama, KU, LSU, Oklahoma, USC, Clemson and Oklahoma State. No matter where they go they want to go together which has been a theme for them since birth. So whatever coach signs them will get a very strong package deal. Whether it is on the field or off the field you will always find these 2 together. As their father I count it as a blessing to have 2 sons that are intellectually and athletically gifted. I thank God everyday for these 2 and I pray that one day I can watch them play at the collegiate and professional level. They have been local sensations for a while but now they are making waves on the national circuit as they travel with the Wichita Cowboys and are leading their team to wins over top teams from Oklahoma, Texas, Kansas and Nebraska. A'maree says "It's really fun to play with my brother because we train together all year long so I always know how hard he is going to play every game because he trains hard. I'm my brothers biggest fan when he scores I always try to be the 1st one to the endzone to either hug him or do our handshake.(Yes they have a handshake) The only time we are ever mad at each other is when we run the read option and I don't give it to him."  Duece says "Our dad has always made sure that we were each others best friend growing up. It carries over on the field. With my brother being the QB I know he has the hardest job on the field so when I play good its not for me its to take some of that pressure off of my brother. When teams focus on the running game that helps  our passing game and I know A'maree is going to make the right plays at the right time."

When asked what they like the most about football A'maree said "I love my teammates. They are like my brothers. We all have love and respect for each other and that's why we win so much because we playing for each other and not ourselves. I  cant wait until I get to high school and college so I can play games under the lights and have the band playing behind me. I want to look up in the crowd and find my parents and grandparents after my 1st touchdown and give my dad a thumbs up."

Duece said " I like scoring touchdowns. I like patting lineman on the back or the helmet because they clear they way for me. My favorite thing is trying to come up with new touchdown dances. I'm running out of them."

Be on the lookout for these 2 because its only a matter of time before they are household names around the country and not just Midwest. Remember these names but if you cant just call them what everyone else does "The Bohannon Boyz."